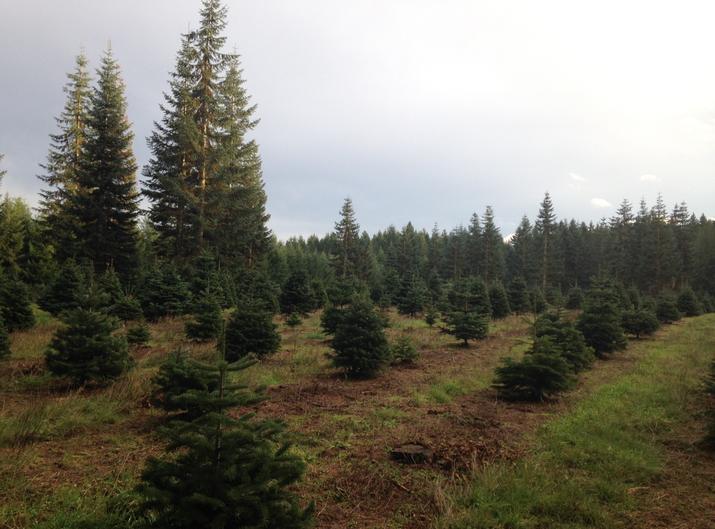 Lone Fir Tree Farms was established in 1960.   It is owned by Dallas and Sharon Boge, the original owner who still actively manage the farms.

U-Cut trees have been available since the 1970s.   It is a tradition for many families in the area to get their Christmas tree at the farm.   Dallas and Sharon look forward to seeing everyone each year.

The farm was purchased on April 8, 1960 and contained about 75 acres, a house and a barn.  A Ford tractor, plow, disc and a planter came with the property.  About 20 acres were cleared and planted to strawberries and grain. Some of the rest was in fenced pasture.  A ¾ acre pond provided water for the strawberries and some recreation possibilities.  The rest of the property was in young timber, some not more than head high, all of which was natural reproduction after logging over many decades.

It was decided to plant Christmas trees on some of the flatter ground, and the first trees were planted the winter of 1960-1961.  The species planted ranged from Douglas fir to Ponderosa pine, giant sequoia, Noble fir and others.  We discovered that many of these species were not suitable for Christmas tree production, at least not in Gales Creek.  Over the years, the plantings expanded to 20 acres.  For many years, we sold most trees wholesale, one truck load at a time.  Time came and the large growers captured the wholesale market, so we switched to exclusively you cut.  Gradually, we cut back our acreage to our current 5 acres, the rest having been converted to timber growing.

1970 saw our property certified by the West Coast Tree Farms, now the American Tree Farm System.  These certifications are internationally recognized as sustainably grown wood.  All our work in the timberland is done in accordance with our written management plan, a vital part of the certification process.

May 18, 1980 saw the eruption of Mount St Helens in Washington State, and the coating of the tree farm in ash.  That layer of ash is still visible in the undisturbed areas of the timberland.  It also marked the first commercial harvest of timber from the property.  Since then, we have harvested some timber, mostly from thinning, about every 3 years.  After a clearcut harvest, the land is prepared and replanted right away to get the next crop underway.  One small area next to the Christmas tree sales building was planted in 1962, harvested in 2004, replanted right away, and is growing again the next crop.

After we were married in 1961, we moved to the farm and lived there until 1963, when job demands made us move closer to work.  We sold about 6 acres with the house and barn in 1965, leaving only the bare land. In 1976, we moved to Gales Creek, buying a farm about a half mile from the tree farm.  In 1992, we built our current home on a 1 acre lot in the corner of the farm, where we hope to stay for the rest of our lives.

In 1999, we changed the form of ownership from sole proprietor to limited liability company, and begin including our adult children as owners.  It is important to us to pass the farm on to the next generation.  They all lead very busy lives and are not able to spend much time on the farm, but are taking more interest in it as the years pass.